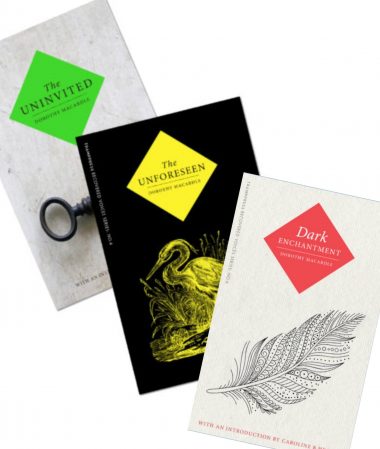 We cannot guarantee delivery in time for Christmas, so we recommend shopping with your local bookseller, or one of these great booksellers:
Kennys
Dubray
Eason
The Gutter Bookshop
Foyles

For a limited time only, buy a three book bundle of Dorothy Macardle’s The Unforeseen, The Uninvited AND newly published Dark Enchantment for the incredibly special price of just €30.

They would have burnt me in the Middle Ages … witches are a nuisance. They are dangerous.

In 1938, Virgilia Wilde, an Irish writer, leaves England to begin a new life in the tranquil setting of Wicklow with her daughter Nan. As strange visions threaten those around her, Virgilia must decide if she can intervene and prevent tragedies to come, or if her worst fears must play out as she helplessly looks on…

This follow-up to the critically acclaimed haunted-house novel The Uninvited is a sharply observed account of pre-World War II Dublin, as well as a darkly prophetic forecast of things to come. The Unforeseen reaffirms Macardle as Ireland’s answer to Shirley Jackson.

‘Casts its own spell’
– Kirkus Reviews

‘Terrific. A gripping ghost story that warns precisely about the silencing act of history and the dangerous process of transforming women into symbols.’ – Dublin Inquirer