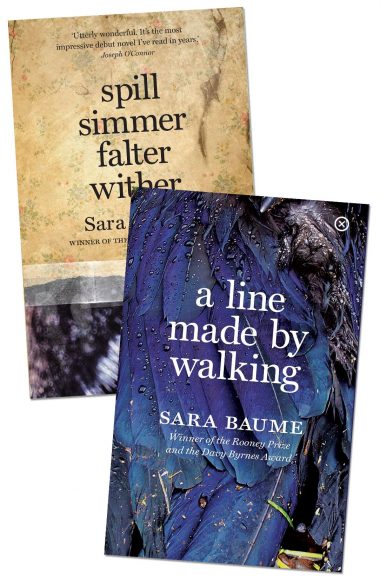 Buy Sara Baume’s Goldsmiths-nominated novel A Line Made by Walking together with her multi-award-winning debut Spill Simmer Falter Wither for just €25. (Both paperback)

A Line Made by Walking

Shortlisted for the 2017 Goldsmiths Prize.

‘When I finished Sara Baume’s new novel I immediately felt sad that I could not send it in the post to the late John Berger.  He, too, would have loved it and found great joy in its honesty, its agility, its beauty, its invention.  Baume is a writer of outstanding grace and style.  She writes beyond the time we live in.’ – Colum McCann

‘I was hypnotised’ – Rick O’Shea

‘Unflinching, at times uncomfortable, and always utterly compelling, A Line Made By Walking is among the best accounts of grief, loneliness and depression that I have ever read.’ – Lucy Caldwell

‘Fascinating because of the cumulative power of the precise, pleasingly rhythmic sentences, and the unpredictable intelligence of the narrator’s mind.’ – The Guardian

‘The writing is superb … I had an image of all of language standing to attention, eager to serve this writer’ Mary Costello

‘An ambitious stylist with an astonishing eye for detail and a clear passion for language. But it is the beautifully measured control of plot and the authenticity of the narrative voice that most impresses’ Irish Examiner